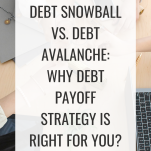 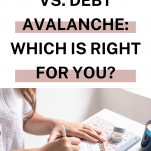 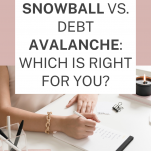 I spent years paying off debt with absolutely no plan in place.

When I started taking on credit card debt after my divorce, I did the same thing. I made the minimum monthly payments. I figured it wasn’t a big deal since my credit card had an interest-free promotional period.

Eventually, it became clear this plan (or lack thereof) wasn’t going to cut it anymore.

First, the interest-free period on my credit card ended, and I realized just how damaging a 20% interest rate can be.

Then my husband and I got married and had a combined six figures of debt. We knew we didn’t want that much of our monthly income going toward debt forever.

When we decided to get serious about paying off debt, I spent a lot of time playing around with different scenarios. I knew that the debt snowball and debt avalanche were the two most popular debt payoff plans, and I wanted to figure out which was best for us.

We ultimately chose the debt avalanche method to pay off our debts. It isn’t necessarily the right choice for everyone, but it absolutely is for us!

In this post, I’ll dive into the different debt payoff plans — the debt snowball vs. avalanche. I’ll share the pros and cons of each and why we went the route we did! 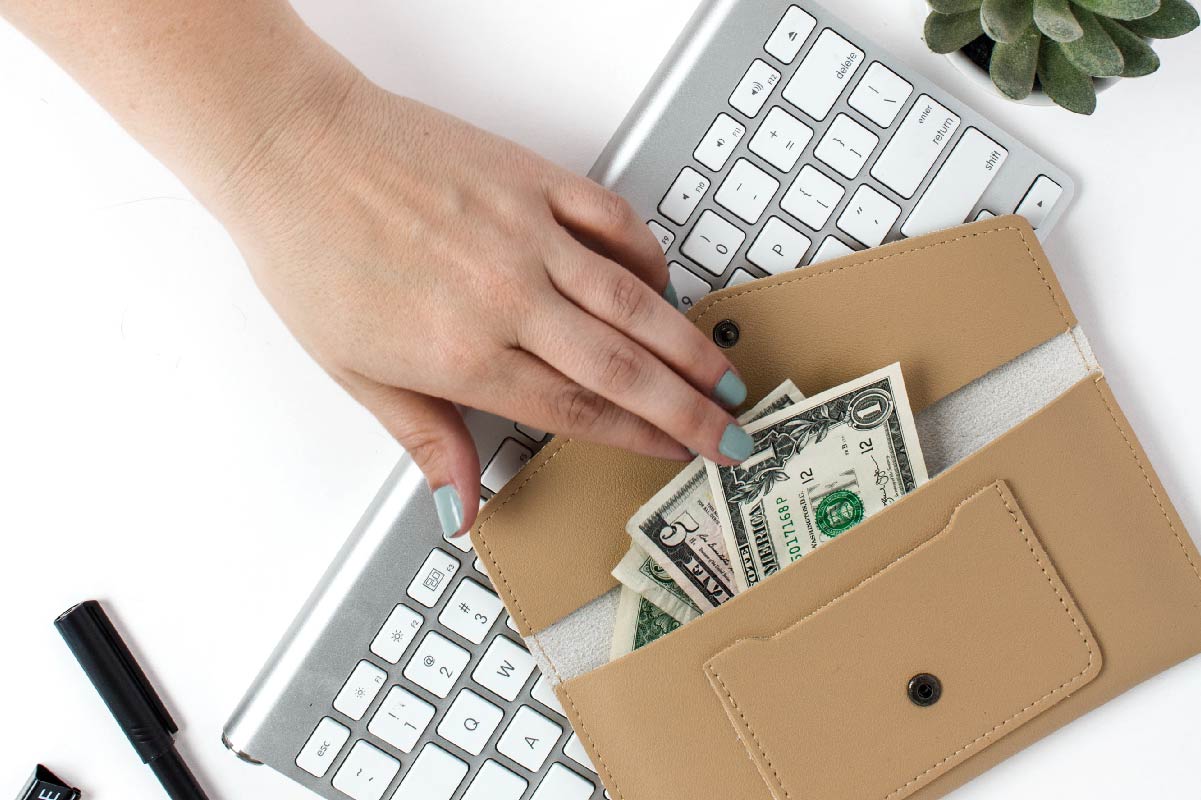 The debt snowball and debt avalanche are two popular strategies designed to help people pay off their debts. These methods give you a framework to follow so you know the order in which to prioritize them.

The two methods have some things in common, including how they start. For both the snowball and the avalanche, you start by writing out a list of your outstanding debts, including your student loan, car loan, personal loan, credit card balance, and more. The only debt you might choose to leave off the list is your mortgage.

That’s largely where the similarities end. Once you’ve listed all your outstanding balances, you prioritize your debts differently depending on the method you choose.

Of course, there is no best way to pay off debt for everyone. Instead, different people will find a certain method that works best for them. But by sharing some of the pros and cons of these two popular methods, you can get an idea of which you may prefer.

What is the debt snowball?

The debt snowball is a debt payoff plan where you pay your smallest debts off first. Each time you pay off a debt, you snowball the money you’re saving into your next smallest debt.

PROS OF THE DEBT SNOWBALL METHOD

The debt snowball gives you quick wins. By paying off your debts from the smallest balance to the largest, you get to celebrate another debt paid off more often. This can be a huge motivator!

CONS OF THE DEBT SNOWBALL METHOD

The debt snowball only considers the size of each debt, not the interest rate. This could result in you paying more in interest than if you did the debt avalanche.

What is the debt avalanche?

The debt avalanche is a debt payoff plan where you pay off your debts in order of the interest rate, starting with the highest interest rate and working your way to the lowest.

PROS OF THE DEBT AVALANCHE METHOD

CONS OF THE DEBT AVALANCHE METHOD

Which is best: Debt snowball vs. avalanche?

Let me preface this by saying that personal finance is just that: Personal. And because of that, there’s rarely one financial decision that’s best for everyone.

It will have you paying your debts off faster and saving money on interest. And depending on how much debt you have, the difference could be significant.

My husband and I have six figures of student loan debt and previously had significant consumer debt, and the difference between the debt snowball and debt avalanche was thousands of dollars!

If you want to see just how the numbers add up for you, you can use an online debt snowball vs. avalanche calculator or sign up for a free tool like Undebt.it, which helps you create your debt payoff plan and shows you which method makes the most sense for you.

The only time I recommend the debt snowball is if you really struggle to stick to any sort of financial plan but are really motivated by wins.

Other debt payoff methods to consider

While the debt snowball and debt avalanche are the most popular of the debt payoff methods, they certainly aren’t the only ones. Some people choose to use a different method entirely or use a hybrid of the snowball and avalanche.

When using a hybrid debt repayment method, you would use both the balance and interest rate of each debt to determine the order in which you pay them off.

For example, the debts with the highest interest rate generally take first priority. But if you have a very small debt with a lower interest rate, you might pay that one off first just to get it out of the way.

Another factor that people consider when prioritizing their debts is the emotional burden they create. When I had to take on credit card debt after my divorce, I had very strong feelings about that debt.

More than any other debt I had, I just wanted it gone. Even if it had a lower interest rate than my other debts, I still would have paid it off first just to live with that emotional burden.

What about other debt management tools?

In addition to the frameworks available to help you pay off debt, there are also a few tools that people often turn to. These tools include balance transfer credit cards, debt consolidation loans, and more.

In the right circumstances, these tools can absolutely be a good fit. Here are some articles that can help you determine if they’re right for you:

Hopefully, this post gave you a good overview of the debt payoff plans available to you. There isn’t one right choice that works for everyone. But one of these plans is sure to work for you!