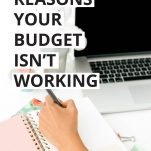 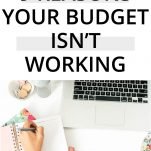 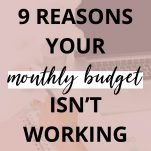 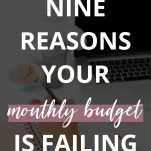 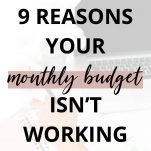 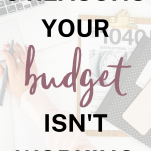 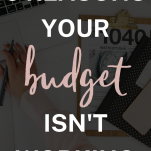 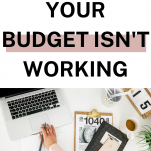 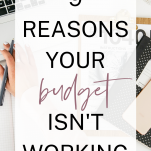 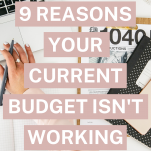 Like many people, my first attempts at budgeting were a complete failure.

I would get really motivated to get my finances on track and spend a ton of time putting together a budget.

But then, one thing would go wrong, and I’d completely abandon the entire thing. It was an endless cycle that repeated itself every few months.

When I finally started getting serious about personal finance, I was able to look at my budget through a more holistic lens and figure out why it had failed in the past.

In this post, I’m sharing some of the mistakes I made in my own budgets and some of the reasons your budget might not be working. 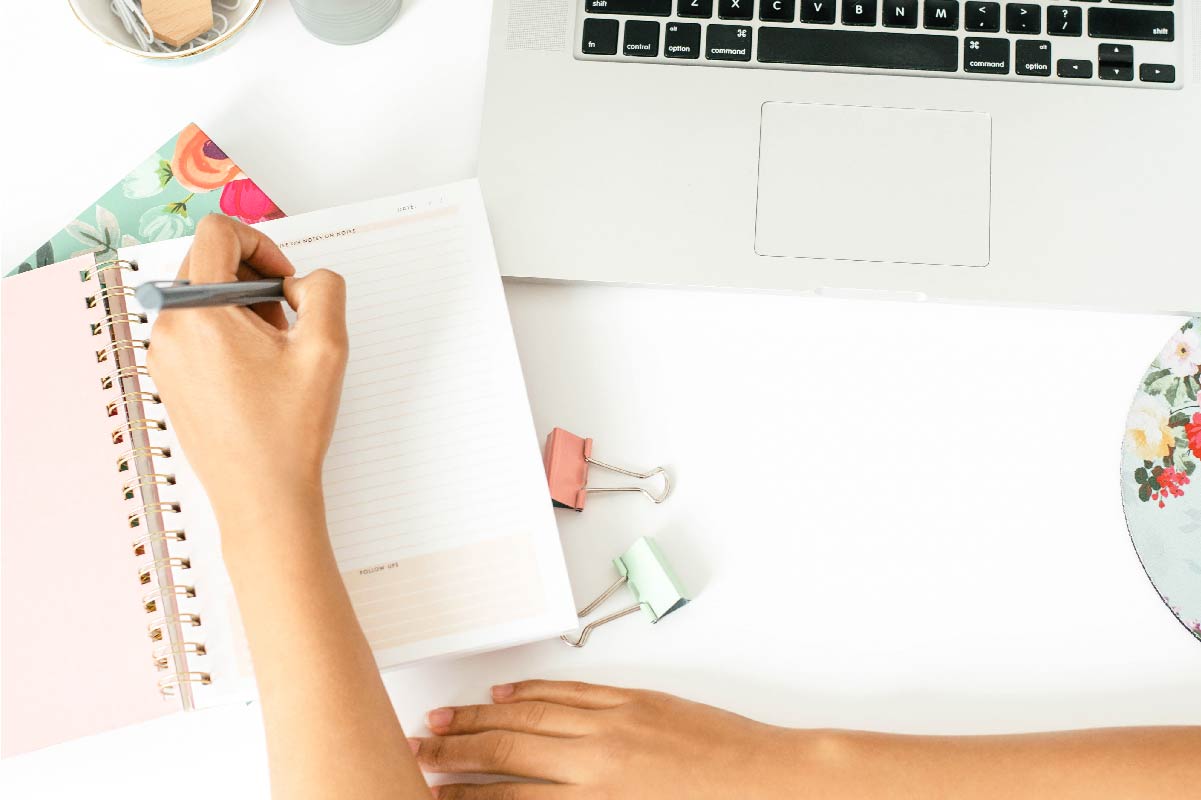 You aren’t being realistic with your expenses

One of the most common reasons that budgets fail is that people just aren’t realistic when they’re making a plan for their money.

Here’s what happens most often. Suppose I start tracking my expenses and realize my husband and I have been spending $750 per month eating out. I panic and start budgeting $50 per month for eating out.

Do you see the problem here? For a couple who spends a lot of money on eating out, cutting out almost all of it at once just isn’t realistic.

Another area I see people make an unrealistic budget is when it comes to groceries. People try to drastically cut their grocery spending but budget too little. And then they end up not being able to stick to it.

Read More: How to Create a Monthly Budget That Really Works

You aren’t budgeting for fun money

If you aren’t leaving room for fun in your budget, you’re going to have a hard time sticking to it.

I know plenty of personal finance experts who push people to cut back in every area possible, especially when they’re paying off debt.

But time and time again, I talk to people who have tried that kind of budgeting and have burned out.

Leaving some room for fun money in your budget will help to make sure the process isn’t a miserable one for you and will make budgeting a lot more sustainable in the long run.

You aren’t planning for occasional expenses

Have you ever had a month where you’re totally rocking your budget, and then your annual Amazon Prime membership comes due, or its time to renew your vehicle registration?

Because it’s not a regular expense, you totally forgot to budget for it. Now it’s thrown off your budget for the entire month.

It’s easy to remember to account for the things you spend money on every month, but far too easy to forget those irregular expenses.

So what’s the best way to deal with those expenses?

Sinking funds. Rather than budgeting for your entire Amazon Prime subscription in a single month, divide the entire amount by 12, and set aside money for it every month. Then, by the time it’s time to pay, the money is budgeted.

Sinking funds are great for so much more than just annual subscriptions. Here are some expenses you might have sinking funds for:

You aren’t tracking your spending

Making a budget is a great first step. But if you don’t actually track your expenses to make sure you’re sticking to it, then it really doesn’t do a whole lot of good.

This is the problem with a lot of budgeting apps out there. You spend a ton of time setting up your budget. You get excited about finally getting on track with your finances.

But then, if you’re not proactive about tracking your expenses, you have no idea if the budget is actually working.

This step is most people’s least favorite part of budgeting. But it’s also a critical step to make sure you are sticking to your budget.

You spend more than you make

Budgeting is a great way to take get control of your spending and be intentional about where your money is going. But things can go off the rails if your budget includes spending more money than you actually make.

This leads to an endless cycle. You get paid but then end up spending all of the money and more. Because you don’t have enough money to cover your expenses, you end up putting some of them on a credit card.

Now in the future, you’ve got to budget for your existing expenses, as well as your credit card bill.

In reality, there are only two ways to fix this problem: decrease your spending or increase your income.

There are a number of ways you can reduce your spending when you’re on a tight budget. You also might consider picking up a side hustle to help you make some extra money to cover your extra spending.

Even the most well-planned and well-intentioned budget will go off the rails if you can’t get your impulse spending in check.

For some people, impulse spending is simply a result of a lack of dedication to their budget. For others, it’s far more than that.

If you’re struggling with emotional spending, a budget alone probably won’t help you to get back on track. Instead, it’s time to get to the root of why you’re spending.

During and shortly after my first marriage, I spent a lot of money. Seriously, I could not stop shopping. Every time I felt lonely, anxious, sad, or any other myriad of emotions, I would shop.

And while learning more about money helped me make progress in other areas of my finances, it wasn’t until I dealt with the feelings that were causing me to shop that I was able to stick to my budget.

You and your partner aren’t on the same page

If you share your finances with a partner, then your budget is dependent on both people being committed. And if you and your partner aren’t on the same page, then it’s easy for things to get off-course.

When you share finances with a partner, communication is critical. You and your partner have to get on the same page if you’re going to have a successful budget.

If you’re the budgeter in the relationship, talk to your partner to make sure they feel included in the process. If one of you is overspending, work together to come up with some strategies to get back on track.

Finding the right budgeting app that the two of you can use together is a great step in getting on the same page and making sure you’re both included!

You don’t have an emergency fund

Failing to have an emergency fund is one of the quickest ways for your budget to get off track.

In a perfect world, emergency expenses wouldn’t happen. Unfortunately, they’re something that we all have to deal with from time to time.

And if you don’t have an emergency fund, then you’re forced to find room in your budget to cover the expenses in the month they come up.

Because most of us don’t have wiggle room in our budget for an emergency, this can throw your budget off not just for one month but for many.

If you don’t currently have an emergency fund, make this your first financial priority for the next few months. At the very least, set aside enough money to cover a month of expenses.

You aren’t being flexible

Perhaps one of the biggest mistakes I see people make is expecting their budgets to look exactly the same every month and then giving up when they overspend in one category.

First, know that your budget doesn’t have to be the same every month. One of the biggest problems with many budgeting apps is that you create your budget and then are expected to use it every month.

I don’t know about you, but every month is different for me. In a month when several friends have birthdays, I might spend more money on eating out. But in a month where I’m staying home most nights, my grocery budget might go up.

Just know that it’s okay for your budget to adapt to whatever is going on in your life at the time.

The other problem people have is that when they go over budget in one category, they think their whole budget is shot. That’s not the case at all!

Listen, we all have a finite amount of money to spend each month. But it’s okay if you don’t end up spending it exactly as you thought you would on the first of the month.

Did you go over budget on eating out? No problem. Just find a different spending category that you can cut back on a little bit.

As long as you spend within your means, your budget is working. The mark of a successful budget doesn’t have to be that you stuck to your original plan 100%.

Getting started with budgeting is one of the biggest hurdles you have to jump when it comes to getting your finances on track. Unfortunately, it’s also one that people most often give up on.

The good news is that if you can figure out why your budgets have failed in the past, you can avoid making those same mistakes again.