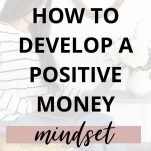 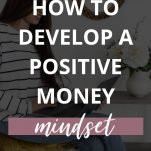 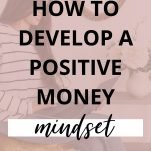 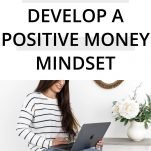 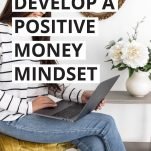 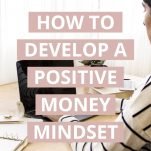 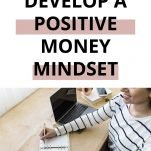 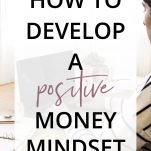 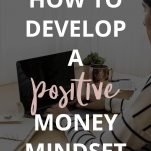 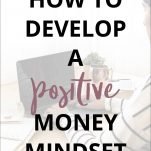 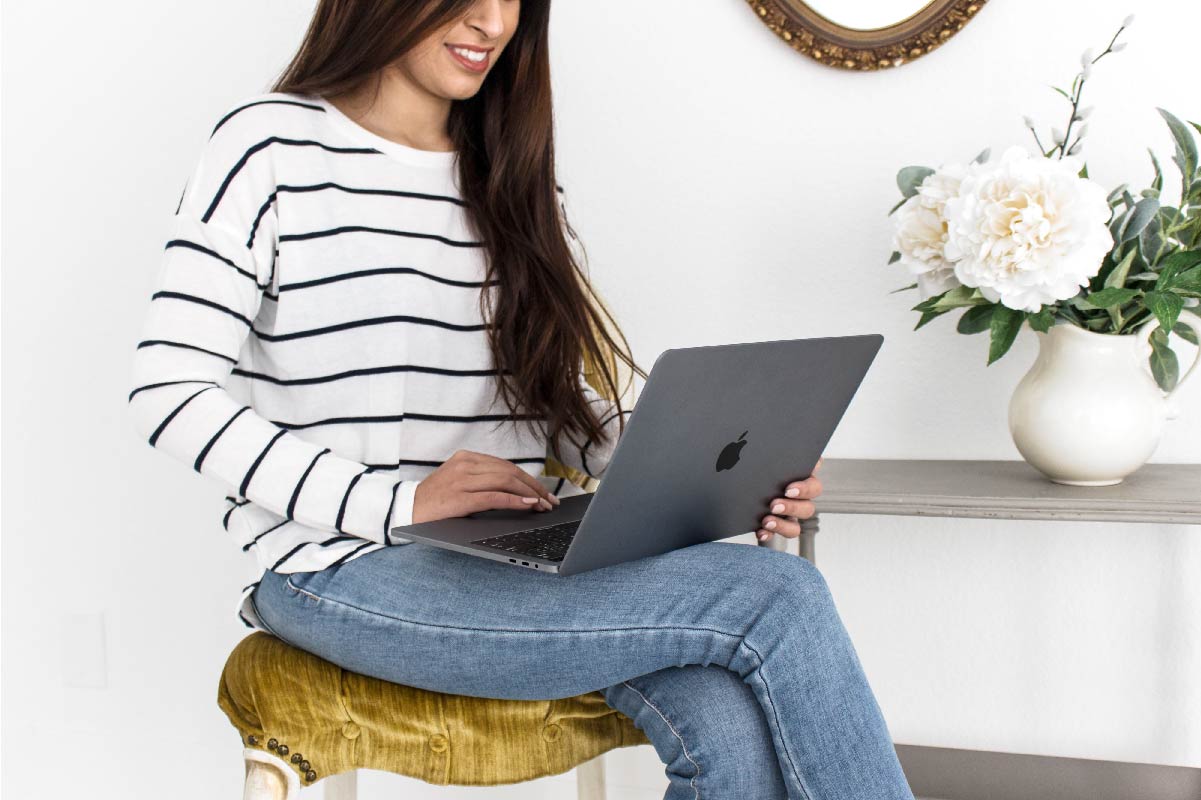 Have you ever been at a point in your life where you learn everything you can about personal finance in an effort to get your money shit in order, but you just can’t seem to turn things around?

Believe it or not, your mindset might be the problem. The beliefs and feelings you have about money play a huge role in the decisions you make and what you make your money situation mean about you.

I’ve definitely struggled with a negative money mindset in my life. After my divorce, I spent a lot of time beating myself up about my debt, my lack of savings, and just my general lack of money expertise.

I can honestly say that changing my mindset around money has been just as instrumental in changing my circumstances as changing my money behavior was.

In this post, I’m sharing what a money mindset is and what steps you can take to turn yours around and develop a positive money mindset.

How to Develop a Positive Money Mindset

What is a money mindset?

Your money mindset is made up of all of the beliefs and feelings you have about money. People have either a scarcity or abundance money mindset, though to be honest, most of us probably fall somewhere in between.

You have a scarcity mindset if you believe there’s not enough money. You’re constantly telling yourself that money is tight and that you’ll never have enough to meet your goals.

If you have a scarcity mindset, you also probably beat yourself up about your money situation. When I struggled with a negative money mindset, I spent a lot of time beating myself up for taking on debt.

You have an abundance mindset if you believe that there’s plenty of money to go around. You trust that even if you spend the money you have now, more will come around. Everything will be okay.

How to have an abundant money mindset

Whether you realize it or not, you already have money beliefs that influence the way you think about money and the world. These beliefs might be a result of something your parents taught you during your childhood.

Think about phrases such as “money doesn’t grow on trees.” Most of us have heard it, partially because most of our parents probably said it. But have you ever stopped to think that your parents repeatedly telling you that actually taught you that money is finite and that there’s never going to be enough?

Or maybe your parents told you that “money is the root of all evil.” If your parents drilled that into your head as a kid, you’re probably going to have some weird mental blocks about earning a lot of money.

You probably also have money beliefs based on your past experiences. Have you ever made a really stupid money mistake, and then for years afterward tell yourself that you’re bad with money?

What that really does is convince you that you’re bad with money. And far too many people develop that belief without ever trying to convince themselves otherwise.

If you’re struggling to identify what your current money thoughts are, write it out. Sit down with a notebook and just spend twenty minutes writing down everything you can think of about money. Eventually, something is going to come up.

Once you’ve identified what your current money beliefs are, you’ll start to identify where those beliefs came from. More importantly, you’ll see that you can change your beliefs.

Understand that money is neutral

One of the most important parts of changing your current negative money mindset to a positive one is recognizing that money is neutral.

So many people have a belief that money is evil, or that a lack of money is holding them back. Money isn’t evil and it isn’t out to get you. It has no value until we give it value. It has no meaning until you give it meaning.

I say all of this because a lot of people blame their money (or lack thereof) or their debt for the problems in their lives. The sooner you can come to terms with the fact that money isn’t out to get you, the sooner you’ll be able to change your mindset around it.

Focus on being grateful for what you have

It’s easy to focus on all the things that are going wrong in your life. Regardless of your financial situation, you’re probably more likely to focus on the bad than the good.

You might spend a lot of time worrying about your debt or about going over budget on your grocery shopping. Yet you give almost no thought to the good things that your money has done for you.

Listen, it’s easy to look at your next-door neighbor with the luxury car or your friend with the designer clothes and feel bad about your life. But it might put things into perspective to remember that a huge portion of the world’s population is living in poverty. And if you live in a developed country, you’re luckier than most.

Whatever your financial situation, find ways to be grateful for it. Yes, even the things that are easy to complain about. Here are a few examples:

Each of those thoughts takes something that could be perceived as negative (debt, a moderate income, going over budget) and spins it in a positive light.

I guarantee that if you think hard enough, you’ll realize you have a lot to be grateful for. I know that for myself, I’m most grateful for the goals my money allows me to have. My husband and I are able to make plans to travel full-time and have adventures because of our financial situation.

Learn to love your money

People are weird about money. These days it’s still a fairly taboo topic. Don’t believe me? Next time you’re talking to someone, tell them that you love money and see how they react.

Here’s the thing though — You can’t expect to have a positive money mindset if you don’t have positive feelings about your money.

Part of the reason we feel weird about loving our money is that it’s not a topic people normally talk about. It’s weird for me to say that I love making a lot of money, because I’m not supposed to tell people that I make a lot of money.

Loving money is also a bit taboo because, let’s be honest, it probably makes us seem like we’re selfish or materialistic or bragging. There’s an element of guilt that comes with it.

If this is what’s holding you back, just remember that you can be generous and giving and still love your money. In fact, one great reason to love your money is that it allows you to help others.

Get better with money

I realize that this post is supposed to be about money mindset and not actionable budgeting advice. But one factor that’s had the biggest impact on my money mindset is getting better with money.

One of the negative money beliefs that many people have is that they’ll never be able to do all of the things they want to do. They won’t be able to go on that dream vacation or buy that dream house because they won’t have enough money. And because they believe it to be true, they don’t really take steps to change it.

I can tell you right now that if you don’t actually take steps to reach your financial goals, you won’t reach them. There will never come a day where you just magically have enough money in your bank account to achieve your financial goal.

If you want to get started with setting financial goals but aren’t sure how, check out my guide on how to set goals and plan your best year ever.

If you need to change your beliefs about money but can’t quite get there, a money mantra is what you need. I know the idea of a mantra sounds a little woo-woo and not like something that actually works, but it really does.

First things first, what the heck is a money mantra?

A money mantra (aka affirmation) is a short but powerful statement that you repeat every single day (preferably multiple times per day) until you believe it.

Your mantra can be something written on a post-it at your desk that you say out loud. I prefer to write mine in my journal every day.

Here are a few mantras you can try if you aren’t sure where to start:

A while back I started working on a mantra saying I can make as much money in my business as I want. At first it felt so clearly false. But now that I’ve been practicing it for a while, I actually believe it.

Hands down my favorite way to learn about money has been reading books. Learning about money mindset was no exception.

I loved Jen Sincero’s first badass book, You Are a Badass. So when I saw she had a money mindset book coming out, I knew I had to read it.

In You Are a Badass at Making Money, Sincero shares her personal money journey. She talks about overcoming her bad money habits and her negative money mindset.

This pulled me in right away because so many of the negative thoughts about money that Sincero said had held her back are thoughts I have had about money too.

I love that she wrote the book from her own personal experience, and I genuinely think everyone can find something in this book that really hits home with them, from identifying the money beliefs that are holding you back to transforming your relationship with money.

Finally, I just love Sincero’s writing style and sense of humor, which made it really easy to read.

Click here to grab a copy of You Are a Badass at Making Money.

The things that we believe about money are a direct result of the experiences we’ve had so far. And unless you want your future to replicate your past, it’s time to make some mindset changes.

I know that honing in on my mindset and learning to have an abundant money mindset has been seriously life-changing.

Changing my mindset has helped me to embrace my debt, while also paying it off faster than I ever would have thought. It’s helped me to drastically increase my income. Finally, it’s taught me to completely change the way I look at my life and my money.

I know that the tips in this blog post can do the same for you!