8 Excuses to Give Up to Start Living Your Best Life 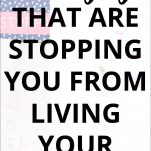 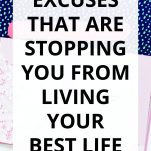 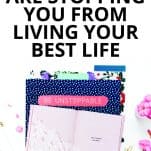 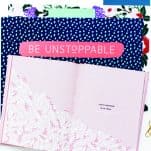 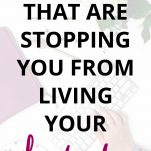 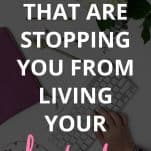 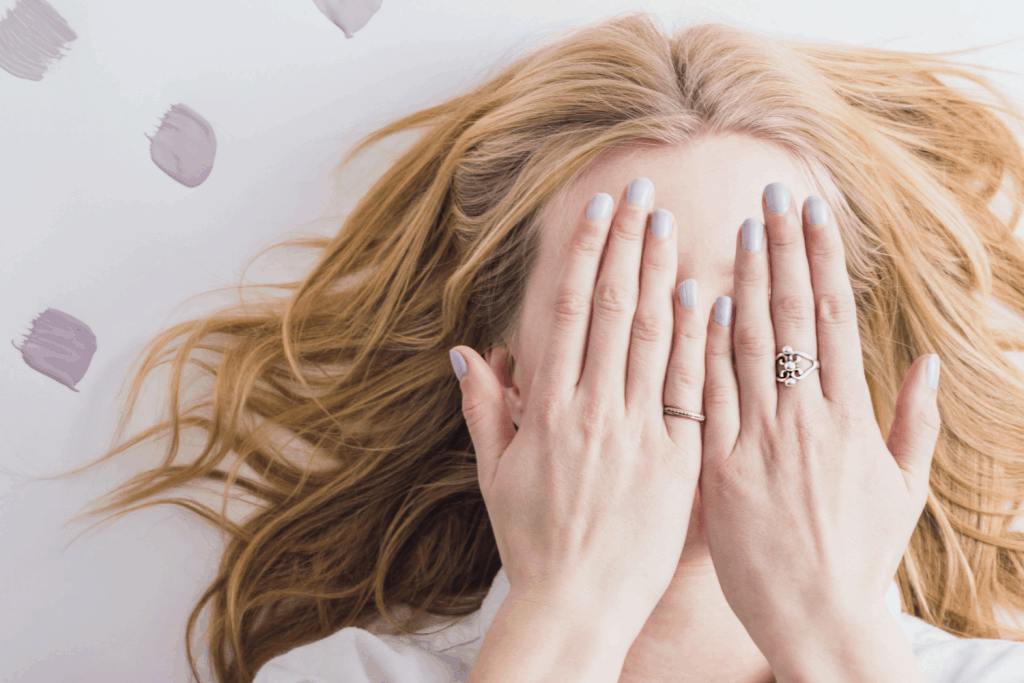 I’m guessing you have some BIG goals you’d love to accomplish someday. Dreams you’ve had for a long time, but have never taken the steps to make them a reality.

Most of us, when faced with the reality of going after our big goals, let fear excuses step in and stop us from living our best life.

I’ve done this to myself more times than I can count. I had a dream that I immediately pushed out of my mind because I was able to come up with so many excuses as to why I couldn’t do it.

In this post, I’m sharing 8 excuses you need to let go of in order to start living your best life and start reaching your goals.

Excuses to Give Up to Start Living Your Best Life

I don’t have enough time

I list this excuse first because it is hands-down the one I hear most often. And also because I use this excuse way too often myself.

Whenever I have something I want to accomplish or a goal I want to reach for, I find myself thinking that I don’t have time now, but someday I’ll have time for it. And there are two big reasons why this thinking is flawed.

First of all, there is never going to be a time in your life when you have all kinds of spare time to devote to these projects. I hate to break it to you, but that time is not coming.

Next, this line of thought makes the assumption that we are not in control of our time.

You currently have all the time you need, you just aren’t prioritizing it in a way that allows you to reach your goals. When you say you don’t have time for a new goal, whether it be starting a business or going to the gym, what you’re really saying is that goal is not a priority for you right now. You’re going to choose to spend your time on other things instead.

The next time you find yourself thinking you don’t have enough time for your goals, I want you to do a time audit. Spend a week writing down how you’re spending every hour of your day. I promise at the end of the week, you’re going to realize you have a lot more free time than you thought.

I remember a time when I was struggling to start new projects in my business or to even stay consistent with blog posts, thinking I didn’t have enough time. Then I realized how many hours per week were being spent watching TV, and I realized I had a lot of extra time, I just wasn’t using it well! Watching TV is not a priority in my life, but my business sure is! That made it super easy to change how I was spending my time.

If it feels like you don’t have enough time to reach your goals, read these 25 time management tips that will help you get more done!

I don’t have enough money

And while it’s true that finances are often a barrier that has to be overcome, it’s not a good excuse to sit on your dreams.

First of all, it’s possible that the goal you’ve been dreaming of doesn’t cost as much as you think it does. For example, you don’t have to spend a lot of money to get in shape. That fancy gym membership is totally optional. You can get in shape for free at home using bodyweight exercises, YouTube videos, and good old fashioned running outside.

And starting that business? Sure, a brick and mortar business is going to have a lot of upfront costs. But you can also bootstrap an online business and have almost no startup costs.

And even if your dream does cost a lot of money, so what? That doesn’t mean it can’t be done. If your dream is going to require some financial planning, then the first step is to create a monthly budget for yourself and figure out where you can be saving money. Then, start looking into ways to make some extra money. There are SO many – I promise you can find one that is the right fit for your lifestyle!

I’m constantly brainstorming new ideas for my business, and occasionally I’ll stumble on an idea that I’m really excited about. Like, can’t stop thinking about it excited.

And then this thing happens where I create arbitrary hurdles that I have to pass before I can reach for that goal or start that project.

For example, I might decide I want to create a new digital product for my audience. But first I should redo my website so when people land there to buy my product, they’re seeing a shiny new website. My website doesn’t need updating, but I’ve created this arbitrary hurdle as the reason why I can’t create my digital product yet.

I’m a perfectionist, and I use that perfectionism pretty often as a reason for procrastinating on going after my goals. I often don’t let myself start new projects until my other projects are done perfectly. But I’m never going to think those projects are perfect.

Stop waiting to be in the right place to go after your goals. There’s never going to be a “right time”. You just have to go for it! 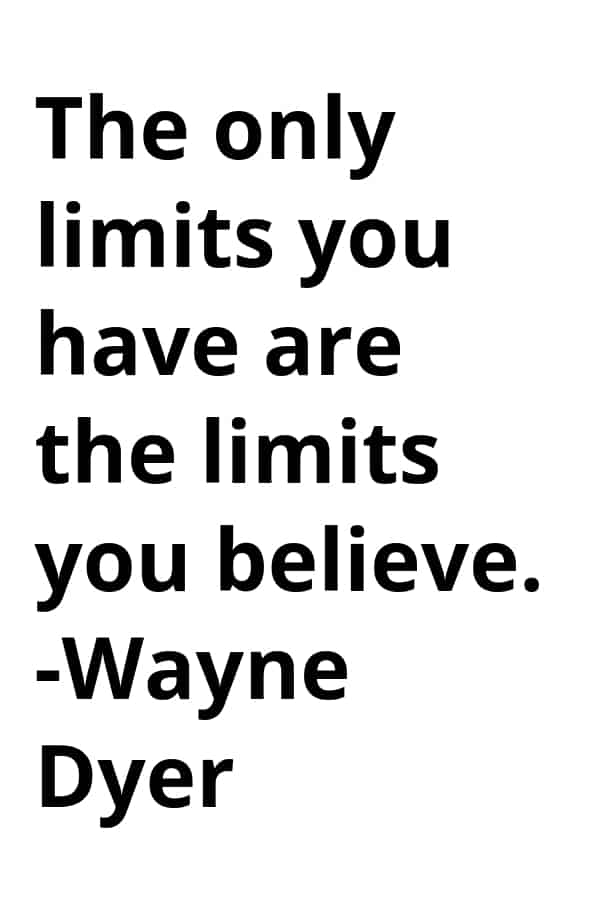 This is completely flawed logic.

First of all, I already successfully make money writing for myself. So why would I think I wasn’t good enough for someone else to pay me?

Second, we’re living in a digital age where you can learn literally anything! So maybe I had never done freelance writing before and wasn’t sure where to start. There are hundreds of people online who specialize in teaching others how to start a freelance writing career!

So the next time you avoid reaching for a goal because you think you aren’t smart or talented enough, I want you to keep this in mind.

Because it’s entirely possible that you do possess the skills you need to reach your goal, you just lack faith in yourself.

And if you genuinely don’t have the skills or knowledge you need, you can learn it! I guarantee a simple Google search will direct you to online resources that will teach you what you need to know.

Stop thinking a lack of information is a hurdle you can’t get past!

Related Article: How a Growth Mindset Can Help You to Reach Your Goals

Awhile back my soon-to-be husband and I had been throwing around the idea of doing some full-time traveling in the next few years. And as we were talking about it, I found myself thinking, “But I’m too old to do that. It’s too late.”

Isn’t that ridiculous? I’m 28. Twenty freaking eight! And I was worried that I was too old to have this amazing life experience.

But in my head, I was thinking about what everyone expects people to be doing as they near 30. Society expects us to be getting married, buying a house, and starting a family. And so I worried that if we took time off to travel full-time, I would be too late getting to everything else.

There are plenty of people who run into this same resistance later in life as well.

People who think that they can’t start their own business, because they have children to take care of.

People who think they can’t go back to school because they’ll be twice the age of their classmates.

Vera Wang didn’t start designing clothing until the age of 40.

Julia Child didn’t publish her first cookbook until the age of 50.

However old you are and whatever it is you want to accomplish – you aren’t too late!

I already know I will fail

Falling short of your goals is a terrible feeling, and I understand the urge to prevent it. I’ve experienced my fair share of failure and it’s caused me to shy away from goals.

There were jobs I applied for that I thought I was perfect for, but I never got so much as an interview. Since then this has caused me to not apply for jobs I was qualified for because I convinced myself they’d find someone they liked better.

I’ve tackled new projects in my business that didn’t go well at all. Since then I’ve refrained from taking on similar projects, convincing myself that I will definitely fail if I try again.

There are so many things wrong with this logic, but let’s talk about just a couple.

First, insisting that you will fail almost entirely ensures that you will. Even if you do reach for your goal, if you spend the entire time believing you won’t be successful, you probably won’t. You’ve decided the outcome before you’ve even taken your first step.

The other problem with this thought process is the assumption that failure is the end of the road. I like to put an end-date on my goals – the day I plan to reach that goal by. This helps me to prioritize it in my schedule, since I know there’s a deadline looming.

But if I don’t finish the goal by that deadline, I don’t quit. I extend the deadline. The deadline was simply there to keep me on track.

So yes, you might fail the first time around. But that doesn’t mean you’ve really failed. It just means you have to keep trying. It might mean making more time for your goal or changing your strategy, but it definitely doesn’t mean it’s over.

Related Article: Lessons We Can Learn From Failure

I’ve invested too much time in my current path, it’s too late to change course

Imagine that you’ve spent years going to school for a specific career, and then several years after that getting established in that career.

Only to realize you hate it and it’s not at all what you want to do.

However, you’ve already spent all of this time in it, so you’d better just keep doing that job you hate until you retire.

Sounds a little ridiculous, doesn’t it? And yet, there are plenty of people who do this.

If you aren’t happy in your career, change careers. Most people change careers a number of times, unlike previous generations who stayed with the same company for their entire career.

Life is too short to stick with a decision that doesn’t align with the life you want.

What will people think?

I’m guessing many of us, whether we realize it or not, are hesitant to go after some of our dreams because we’re worried about what people might think.

When I first started blogging, I avoided sharing anything about my blog on my personal social media pages. I didn’t want anyone I knew to know about my blog. I was worried about what they would think.

But here’s the thing – no one cares that much what I’m doing. The people who are genuinely paying attention are those who are in my support circle, and who are fully supportive of my business. And anyone who might be judgemental of what I’m doing isn’t someone whose opinion I really care about.

There’s a quote that I think perfect sums this up:

Other people who are going after their dreams aren’t going to look down on you for going after yours! 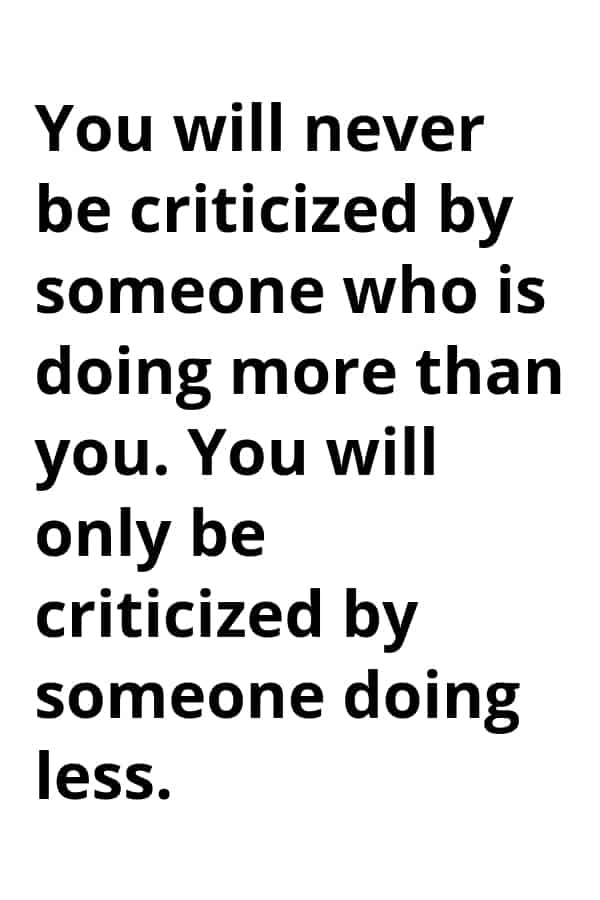 Going after your big goals is never going to feel comfortable. The big goals are the ones that are going to change your life – and change is scary!

You’re going to feel resistance when you start. And those excuses and limiting beliefs that come up are totally normal.

That’s when you’ll be able to start living your best life. 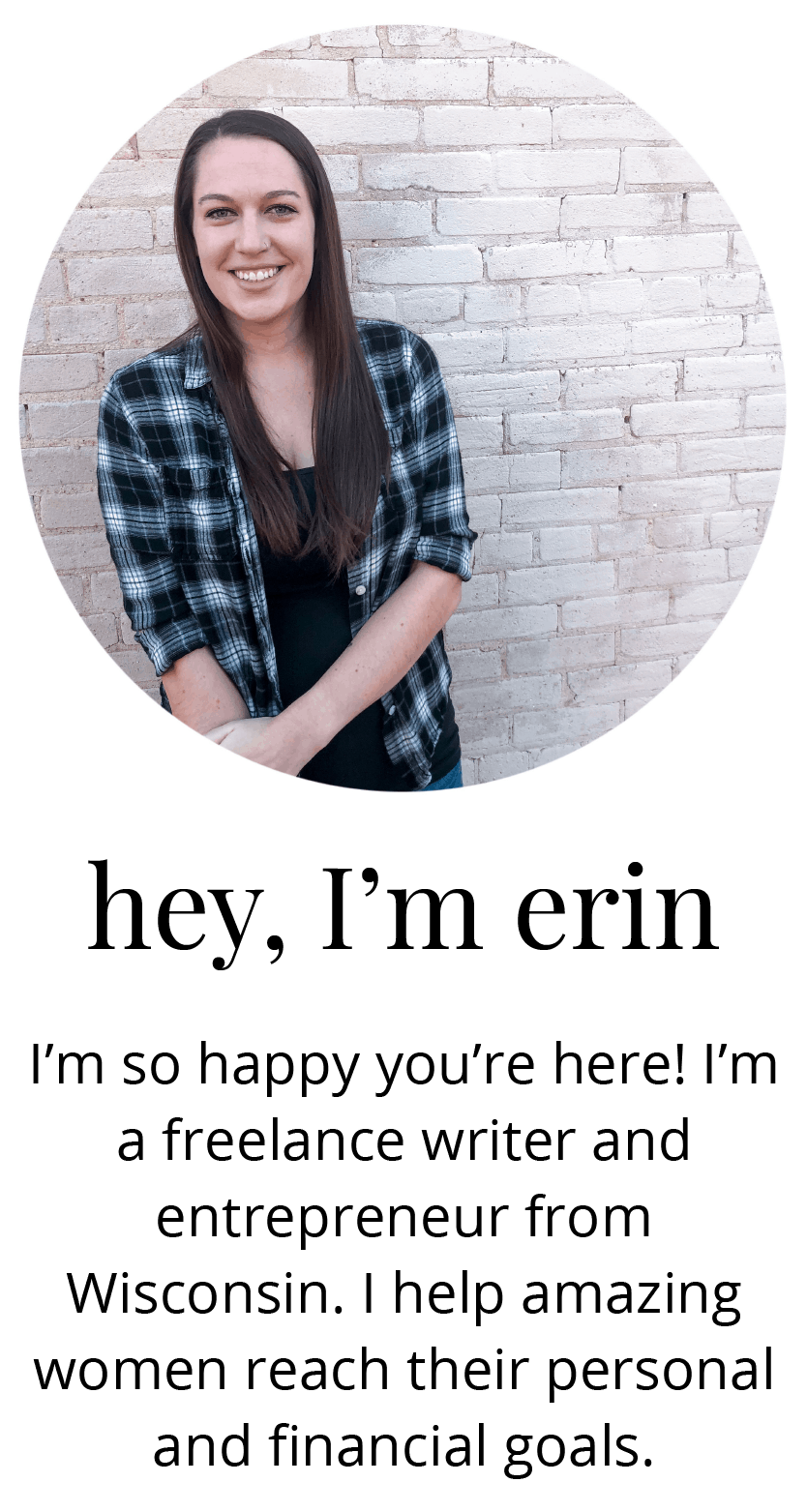 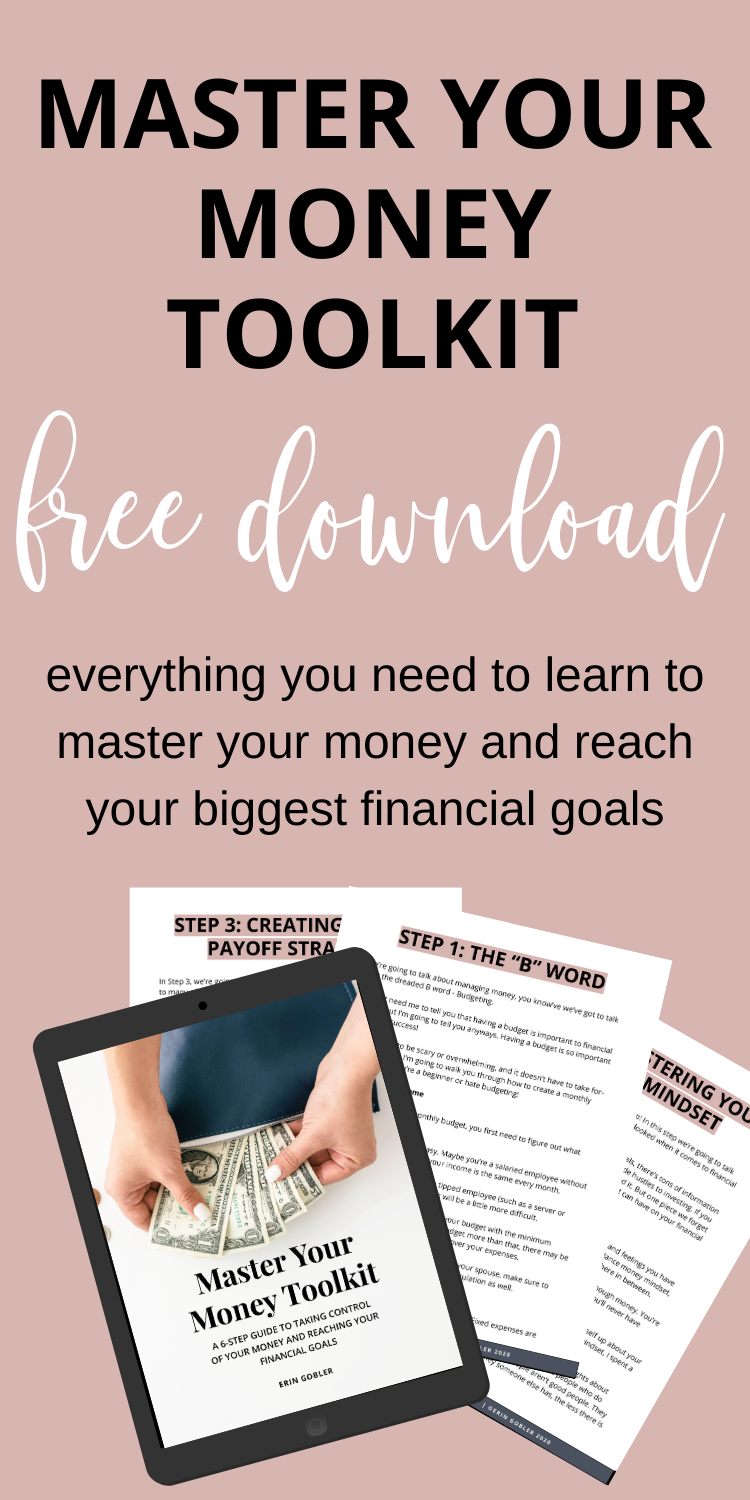